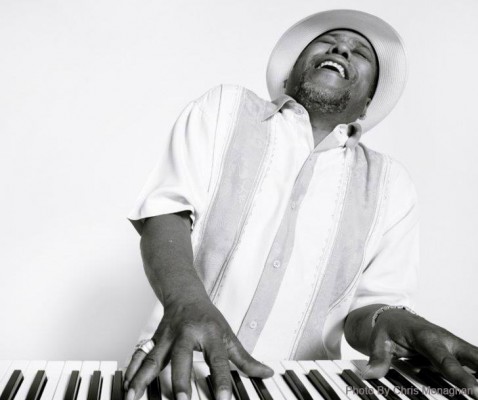 They started out opening for a lot of acts coming to Chicago, Like Tyrone Davis, Johnny Taylor, Albert King. He knew then he wanted to be a showman.

By the 90’s he was touring with the Ohio Players, Kool & The Gang.

That’s when found out that people are the same all over the World. They want to have a good time, and feel like there a part of the experience .

He’s a high energy performer that sings and plays keyboards. He Will make you get up and dance and sing along.

After producing such artist like Artie Blues Boy White, Cicero Blake, Stan Mosley, He just recorded his first CD ( All For You ) on himself ,and it’s doing great in the States.

A must see act.

“Keyboardist Ronnie Hicks and his Mahseen Company formed in the mid-‘70s, they’ve recorded and performed with artists ranging from veterans like Cicero Blake and Artie “Blues Boy” White through younger-generation singers such as Nellie “Tiger” Travis to journeymen like blues-rocker Jimmy Nick. It goes without saying, then, that versatility is their stock in trade, and when they get the opportunity to have an entire show to themselves, they strut it like a peacock.  Hicks, a deft instrumentalist who leavens his church-honed emotionality with jazz-tinged rhythmic and harmonic dexterity, is also a solid  vocalist and an accomplished showman: I’ve seen him segue from a blues warhorse like “Hoochie Coochie Man” into an impishly exuberant Culture Club cover without missing a beat, and at times like that, his trickster-like glee at confounding his audience’s expectations is almost as enjoyable as the music.”