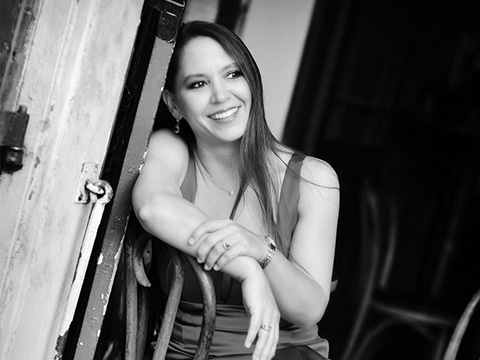 That world lies just north of Greenville, Mississippi on the two-lane Highway 1, which follows the twists and turns of the river through fecund swampland, time-forgotten plantations, and blink-and you’ll-miss-’em communities like Rosedale, Benoit, Wayside, and Grace before it dead ends into Highway 61 at Onward. It was there that Brent was able to develop her gutsy vocal-and piano chops via family sing-a-longs and a 16-year apprenticeship with the late blues pioneer Boogaloo Ames, who ultimately dubbed his protégé “Little Boogaloo.”

“Music school taught me to think, but Boogaloo taught me to boogie-woogie,” says Brent, who appeared alongside her mentor in the 1999 PBS documentary Boogaloo & Eden: Sustaining the Sound and in the 2002 South African production Forty Days in the Delta. Where most 21st century roots musicians merely emulate their heroes, Brent and Ames were both “soul mate and road buddies,” says lifelong friend (and acclaimed journalist) Julia Reed.

“She was a young white woman of privilege and he was an aging black man in the Mississippi Delta, but theirs is a phenomenal story of mutual admiration and need.” Yet much more than the blues flows through Brent’s talented hands: Critics laud her “Bessie Smith meets Diana Krall meets Janis Joplin” attitude, compare her to jazz/pop dynamos Norah Jones and Sarah Vaughn, and wax effusively about her “whiskey-smoke” voice, which serves as a constant reminder that Greenville, nestled into a bend of the Mississippi River, is located a few hundred miles north of New Orleans.

Whether booked as a solo artist or bandleader, Brent’s performance is fresh and spontaneous, often filled with audience requests and participation. Her unshakable talent and her carefree demeanor have taken her across the country and around the world, with appearances at the Kennedy Center, the 2000 Republican National Convention, the venerable Waldorf-Astoria Hotel, and tours of South Africa and Norway under her belt.

Since launching her career, she’s won the Blues Foundation’s 2006 International Blues Challenge, and was a 2004 inductee on the Greenville Blues Walk. Sharing a bill with B.B. King, Brent performed at the 2005 presidential inauguration, and solo, she’s appeared at the British Embassy and at the My South celebrations in Mississippi and New York. She’s also burnished her reputation via appearances on radio shows like the syndicated Beale Street Caravan and XM’s Bluesville, at festivals like the Waterfront Blues Festival, Edmonton Labatt Blues Festival and the annual B.B. King Homecoming, and aboard the Legendary Rhythm & Blues Cruise. With the 2008 release of her new album Mississippi Number One, Brent is now ready to take her place as one of the fresh voices propelling this vital American music forward. As Chip Eagle, publisher of Blues Revue, BluesWax, and Dirty Linen says, “in Eden’s huge playing and singing you can hear the ghosts of Mississippi in duet with the future of the blues.”