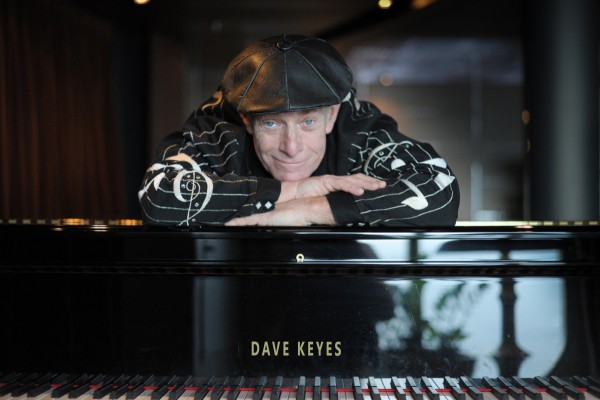 New York City native keyboardist, singer and songwriter Dave Keyes is a 30 year veteran of the Blues, Roots and Americana music scene. He has released 5 highly acclaimed CD’s under his own name, has been named the “best unsigned artist” by Keyboard magazine, and also has been nominated by the Blues Foundation for the annual Pinetop Perkins best piano player award. His 6th CD titled “The Healing “ featuring Popa Chubby and many other special guests is slated for release in May.

Dave has played with some of the most important figures of blues, roots and folk music, having had long musical relationships with Odetta, David Johansen, Bo Diddley, rockabilly legend Sleepy LaBeef and gospel great Marie Knight among many others. In addition to his own solo gigs and gigs with the Dave Keyes Band, he currently can be found playing with Popa Chubby, Rock and Roll Queen Ronnie Spector, and gospel/blues innovator Alexis P. Suter and the Ministers of Sound. Dave’s music finds it’s roots in deep blues, soul, and rock and roll, and continues through his recent CD’s and vibrant live shows. His CD’s consist of original sets that range from shuffles and ferocious Boogie Woogie to soulful R&B, zydeco, country blues, and solo gospel piano. His festival appearances under his own name include King Biscuit, Mississippi Valley, 3 appearances at France’s prestigious Cognac Blues Festival and annual appearances at Lugano, Switzerland’s Blues to Bop festival among many others. The last several years Dave has also toured Europe extensively with both Popa Chubby and Ronnie Spector often doing double duty, opening the shows as a solo artist. Over the last 20 years, Dave has also worked in many roles as a band leader and conductor for both Broadway shows and TV, most notably conducting over 600 performances during the 6 year Grammy winning Broadway smash run of Smokey Joes Café. Dave also served as the musical director and ba