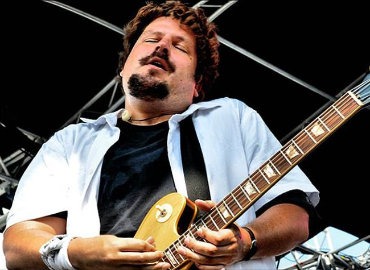 Giles Corey is a dynamic and innovative blues guitarist, singer, and songwriter from Chicago who learned from the greats of the genre. He has performed regularly with Chicago greats such as Otis Rush, Magic Slim, Eddy Clearwater, Syl Johnson, Sugar Blue, and Billy Branch over the course of his 20 year career. In addition, Giles fronts his own band, recording for Delmark records. He performs consistently throughout Chicago with his group, as well as international trips to Europe, South America, and Japan. His music combines the traditional Chicago styles of blues that he grew up with with soul, funk, and rock'n'roll, creating an irresistable stew of American music. Similarly, Giles' live perfomaces feature both pure Chicago blues numbers, mixed with swampy slide and uptempo funk, delighting audiences wherever he goes